Millions of Americans have food allergies and may experience an adverse reaction to products that contain allergens. Of those that are school age, an estimated 8% of children in the United States have a food allergy. That’s 1 in 13 children, or about 2 students per classroom. A food allergy occurs when the body has a specific and reproducible immune response to certain foods. The body’s immune response can be severe and life threatening, such as anaphylaxis. Anaphylaxis is a sudden and severe allergic reaction that may cause death. While not all allergic reactions will develop into anaphylaxis, more than 40% (2 in 5) of children with food allergies in the United States have been treated in the emergency department.

When a person has a food allergy, the immune system that normally protects people from germs, mistakenly responds to food as if it were harmful.There is no cure for food allergies. The symptoms and severity of allergic reactions to food can be different between individuals and can also be different for one person over time. Strict avoidance of the food allergen is the only way to prevent a reaction.

To date, 8 foods or food groups have been seen to account for 90% of food allergic reactions in the United States (The Big 8): 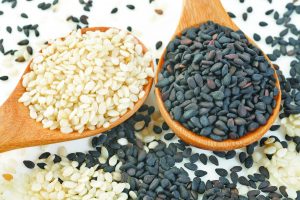 The U.S. is poised to add a 9th allergen to the list: sesame. More than 300,000 people in the United States suffer from sesame allergy. The U.S. House and Senate have both approved the Food Allergy Safety, Treatment, Education and Research (FASTER) Act,  which would declare sesame as the ninth major allergen, as defined by federal law. The bill now goes to President Biden for his consideration. If signed, sesame would be added to the list of major food allergens.

Canada and several European counties already include sesame on the list of common food allergens.  Passage of the FASTER Act would require that sesame appear predominantly on a food label where it is used as an ingredient.

We teach, learn, lead and serve, connecting people with the University of Wisconsin, and engaging with them in transforming lives and communities.

Connect with your County Extension Office »

Find an Extension employee in our staff directory »

Feedback, questions or accessibility issues: info@extension.wisc.edu | © 2023 The Board of Regents of the University of Wisconsin System
Privacy Policy | Non-Discrimination Policy & How to File a Complaint | Disability Accommodation Requests

An EEO/AA employer, University of Wisconsin-Madison Division of Extension provides equal opportunities in employment and programming, including Title VI, Title IX, the Americans with Disabilities Act (ADA) and Section 504 of the Rehabilitation Act requirements.